Friday night Andreas Hoffmann (2nd lead of the VfL-NiederRhein user group) picked me up ad we drove the long way down to the south.

Our destination for Saturday morning was the Chaostage event of the .NET user group Deggendorf  (http://dotnet-deggendorf.sefnet.de/). I had a session “Introducing the concepts and architecture of ASP.NET“ in the morning and a second one “Hello WebServices – Message-Oriented Programming for distributed systems” in the evening. 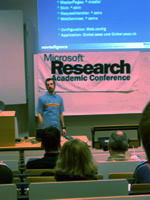 We checked in at our hotel in Garching (I won’t tell the name but I’ll tell you a bit about the worst service). Because the waitress served me frozen potatoes with my steak I stood up and walked over to the bar. Just in this moment a voice behind me asked “Is this a codezone keychain? Are you gonna be at Microsoft on Monday?” It was Nicki Wruck, the organizer of the ICE 2005 Community, together with Frank Solinske, IT-Pro Security Guru. Only one nano-second later we drank the first beer together. The geek meet was so exciting that I was just about to forget the bad service of our hotel J

Sunday we fetched Stephan Oetzel (http://stephanon.net/) in Poing. We picked up Michael Willers Developer Security Guru from the Airport to merge the Security guys in the Hofbräukeller. Uwe Baumann discussed about technical stuff with Andreas and me meanwhile. Later Nicki joined us together with Nico Lüdemann and Carola Helfert .

Monday - Launch Day – started with the Community GetTogether. Stephan and Andreas and I presented the results of the .NET Summit NRW (our community event). As always the time to do some “networking” was toooooooo short - even if we had at least the day before to talk to a few guys. The Launch Party was great. Steve Balmer’s Launch talk was transmitted per satellite into the Lobby of Microsoft in Germany – Great. The only problem again: So many people and such a small amount of time :-)